Skip to Main Content
It looks like you're using Internet Explorer 11 or older. This website works best with modern browsers such as the latest versions of Chrome, Firefox, Safari, and Edge. If you continue with this browser, you may see unexpected results.

For each type of source in this guide, the general form and specific examples will be provided for the Notes-Bibliography style options of Turabian.

This information and several of the examples were drawn from A Manual for Writers of Research Papers, Theses, and Dissertations (9th Edition). Numbers in parentheses refer to specific pages in the manual. 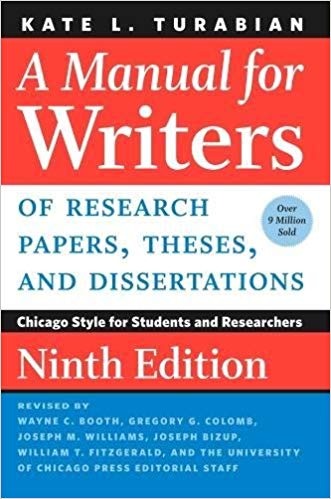 For further information, please ask your instructor or refer to the Turabian manual.

Citations for television and radio programs may vary depending on the type of source. Your citation should at least include the title of the program, name of episode or segment, date it was first aired or made available, and the name of the studio or entity responsible for producing it. You may also include the name of the director or author, season and/or episode numbers, and key performers. Italicize the titles of programs and put the episode or segment titles in quotation marks. If the program is viewed or listened to online, include the date of access and the URL. Also include the type of medium that you used to access the program if other than the original format (17.10.3.2).

Instead of creating a note or parenthetical citation, the program information can be cited by including the primary elements into the text of your paper. This works well if you only have a limited amount of relevant citation information. See the examples in the Manual 17.10.3.2.